I’ve been spending my off hours during the majority of the COVID-19-imposed lockdown pounding pavement, pushing film, and taking photos. I bought myself a Nikon FE back in May, and it arrived weeks later; I’ve been shooting film ever since, mostly rolls of Ilford HP5 Plus. Shooting film is interesting: film forces you to think about the composition and elements of the shot, which in turn forces you to stop and pay attention.

Don’t get me wrong: I still do think about these things when I shoot with my D80, but I tend to take those shots which I tend to delete later. That is, if you can boil it down to some trite phrase, when shooting digital I err on the side of quantity over quality.

I find film interesting because it forces me to stop and think about the shot more. I have 36 frames and I need to pause and consider whether there’s something to take, to make the most of the limitations of the medium. There’s also the delayed gratification of having to wait for my roll of film to be developed before knowing whether or not I’ve got it.

To be fair, the feedback loop of film is awful, especially shooting on an SLR: you have to wait days if not weeks for you to know whether you got the settings and metering right, or whether the framing works, etc. If you’re ever thinking of shooting film, I highly recommend using a more “automatic” camera such as a point-and-shoot or even a later-model SLR, as those can help a lot in getting the exposure right – goodness knows I’ve screwed up several times with my exposure, and I have the negatives to prove it.

Thankfully though I’m fairly well-practiced with riding the in-camera TTL meter needle: I’ve shot with my D80 on manual for years now that it’s almost second-nature for me to do adjust my shutter speed or aperture almost without looking, and I can almost guess at what the metering for a particular scene will be – often I’ll be just around a stop under or over. I still mess up though, so I definitely can’t shoot without some form of metering.

The varous film stocks also have their own quirks and idiosyncrasies. Again, the vast majority of the photos I’ve been taking have been on black and white film stock. Shooting at night, as I am wont to do on my nightly walks around the city, has its own challenges.

HP5 Plus is nominally an ISO 400 film, but you can push it to ISO 1600 or even 3200. The higher the ISO value of the film, the more sensitive it is to light. For night shooting, you want higher ISO film – however, there aren’t really super fast films nowadays, what film being a fairly niche market, and super fast high ISO films being a niche within that niche. However, you can push film: pushing film means that you’re intentionally underexposing the film, treating it as though it were a faster film, and compensating during development time. It’s sort of like compression: you end up with a really high contrast shot, at the expense of a loss of some tonality, as the low-end mids and shadow detail just end up being black in the end product. 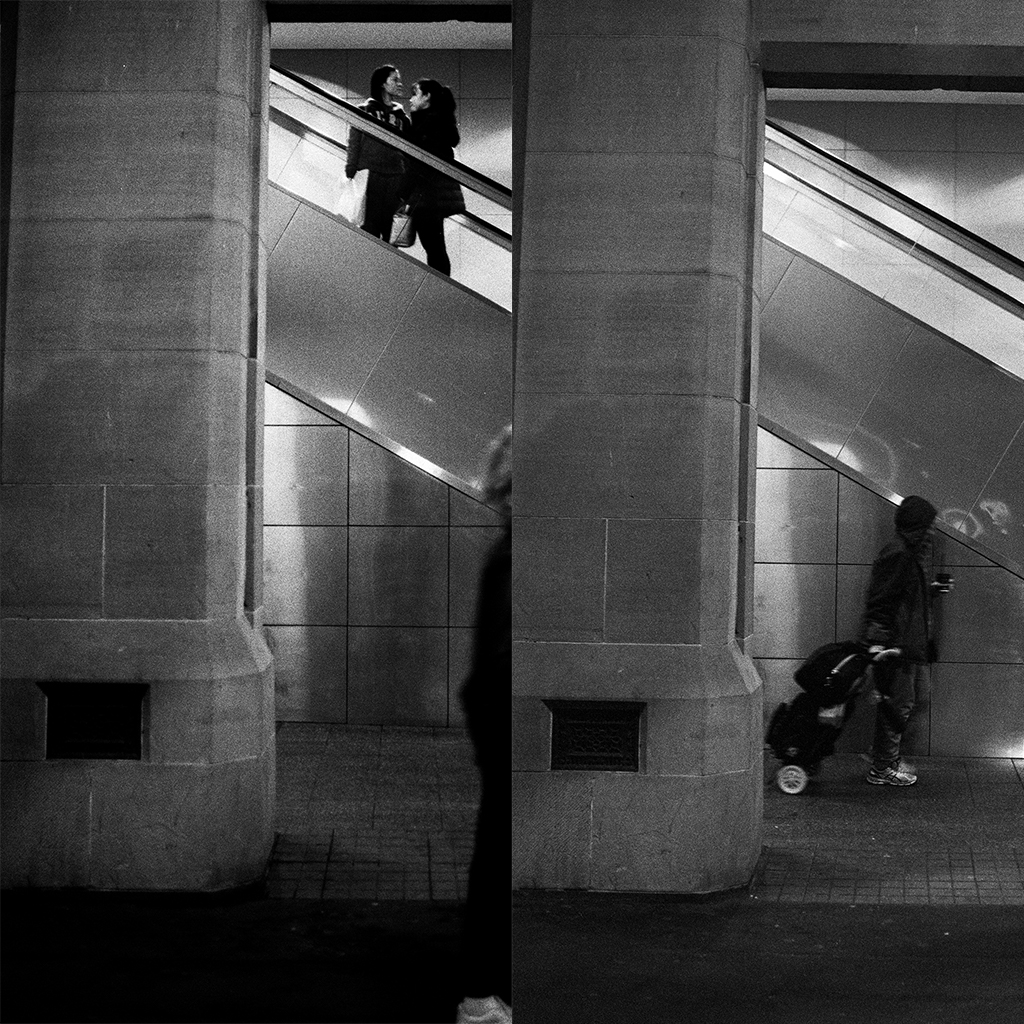 A comparison between HP5 plus (left) pushed to 1600 and a faster, higher ISO film, Kodak T-MAX P3200 (right). Note the loss of shadow detail in the HP5, particularly in the foreground, and the grate at the base of the post.

I’ve been having loads of fun though, and it’s made me take a closer look at the city I live in. And I’m slowly gaining more confidence in doing street photography, which to be honest is tough for me – I’m fairly non-confrontational, and I’ve yet to master blending into the background noise of everything.

Previously: Rage Against The Machine